The age of
DRED

﻿Goal﻿: The goal of this project is to provide a framework in which you can apply your knowledge of microcontrollers and multi-processor communications to a task that will provide an enjoyable experience for the users and the observers.

Purpose: The underlying purpose of this project is to provide you with an opportunity to gain experience in integrating all that you have learned in the ME218 course sequence, with an emphasis on the new material in ME218c.

Background: When we last saw DrEd he was in the basement of his lair, right before it exploded. Everyone thought that he was dead and ME218c would be an easy A. Not so! He escaped though an underground series of tunnels where he has been tirelessly scheming to develop his Ultimate Weapon. Reliable sources place DrEd in a remote swamp, though no one who has gone to investigate has returned. Rumor has it that he has now developed the ability to take control of someone’s mind with a single injection of a solution of carbonated water, carmel color, aspartame, phosphoric acid, potassium benzoate (to protect taste), natural flavor, citric acid and caffeine. Due to toxic leakage from DrEd’s facility, the swamp is impassible to all conventional vehicles. The only forays that have penetrated the perimeter of the swamp have been conducted by hovercraft which are able to remain above the industrial sludge but below the radar systems that DrEd uses to scan for intruders. DrEd is thought to have his own fleet of hovercraft that have been captured from prior missions and have been converted by DrEd to Mind-Controlled vehicles. Queue branch has commissioned teams of intrepid engineers to develop a fleet of hovercraft to pierce DrEd’s security cordon and vanquish DrEd once and for all.

The Task: Design and build a tele-operated Swamp Penetrating Electronically Controlled Tactical Reconnaissance Explorer (SPECTRE) and a companion Mechatronic Integrated Interactive Intelligent Infrastructure Intrusion Interface (MI6). Groups of SPECTREs will operate in Terman DrEd’s Pond Swamp. During rounds of the game the SPECTREs will attempt to reach DrEds mothership (the DrEdStar) and disable it. They will be opposed by DrEd’s flotilla of Mind-Controlled SPECTREs. 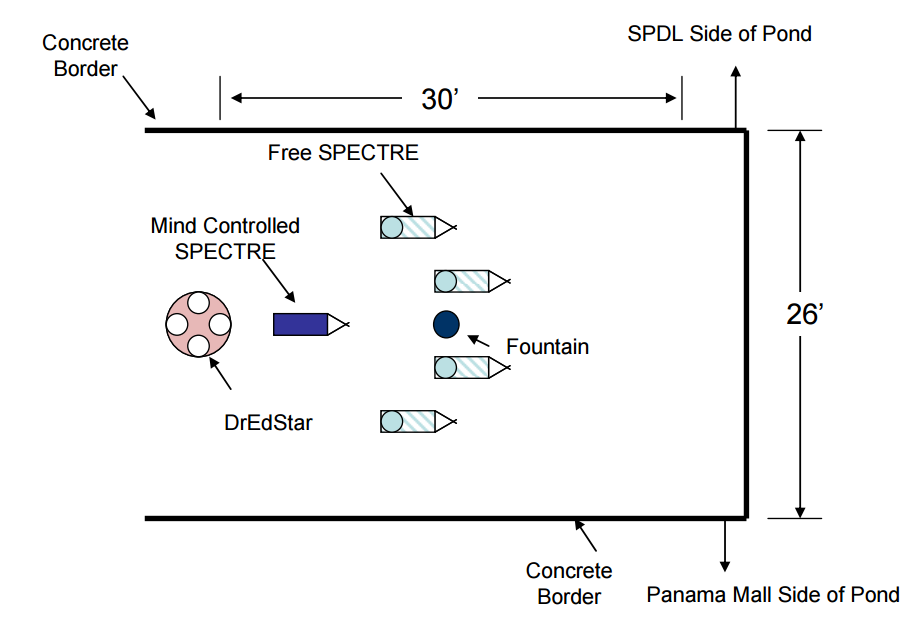